The Life of Saint Cecilia 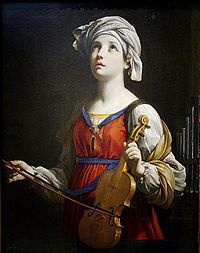 For the last twenty five years or so there is a great effort being made by many people to discover their roots, to reassemble the family tree. In that spirit the following gives an account of the life of the Patroness of music.

The late Father Lawrence Lovasik, member of Divine Word Congregation did some research and a wrote small pamphlet: St. Cecilia, Model of Purity.

The most celebrated account of the life of St. Cecilia is contained in the Acts of Her Martyrdom, written in the fifth century. Probably only the main facts of this document have been received from authentic sources. These Acts have been transmitted in numerous manuscripts and were also translated into Greek. They were used in the prefaces of five different Masses in honour of St. Cecilia. The following story of St. Cecilia is the substance of this ancient account.

Cecilia was born in Rome on the Campus Martius in the second part of the second century, in the northwestern part of the city. She was brought up a Christian. Though her father was a pagan, she probably had a Christian mother. She belonged to a noble patrician family, whose ancestors were illustrious in Roman history. There is still a most imposing monument along the Appian Way, the Tomb of Cecilia Metella, the wife of Crassus, one of Caesar’s generals in Gaul. This family contributed much to the power and splendor of Rome. Eighteen consuls and many high officials and famous generals, who by their conquests won titles as a reward for brilliant victories, came from this noble family.

Though very rich and distinguished, Cecilia lived a life of prayer and penance. She wore a coarse garment beneath the clothes of her rank, fasted several days a week, and was determined to remain a virgin for the love of God. When she was very young, her father gave her in marriage to a youthful pagan patrician named Valerian, who took her to his palace in the present Trastevere quarter of Rome.

On the day of the marriage, amid the music and rejoicing of the guests, Cecilia sat apart, singing to God in her heart and praying for help in this difficult situation.

When they retired to their room, she said to her husband gently, “I have a secret to tell you. You must know that I have an angel of God watching over me. If you touch me in the way of marriage he will be angry and you will suffer; but if you respect my virginity he will love you as he loves me.”

“Show me this angel,: Valerian replied. “If he be of God, I will refrain as you wish.”

And Cecilia said, “If you believe in the living and one true God and receive the water of baptism, then you shall see the angel. There is an aged man, hiding in a certain place, who has power to cleanse men in the lustral water, and so makes them worthy to see the angels.”

Valerian inquired, “Where shall I find this old man?”

Cecilia replied, “Go as far as the third milestone on the Appian Way; there you will find some poor people who beg alms of the passers-by. I have always helped them, and they possess the secret. When you see them, greet them in my name and say, ‘Cecilia has sent me to you that you may lead me to the holy old man Urban, for she has entrusted me with a secret mission to him.’ Relate to him what I have told you about the angel, and when he has baptized you he will clothe you with a new, bright garment. When you enter this room, dressed in this garment, you will see the holy angel.”

Valerian followed the Appian Way and turned off the highway at the third milestone toward an old sand pit. There he found some aged beggars and cripples. They were the Christian watchers who guarded the secret entrance of the catacombs, and reported any soldiers or suspicious persons coming that way. Valerian was richly dressed, and his proud bearing betrayed the heathen, but when he gave the required greeting and password, they led him into the catacombs. He was received with joy. A venerable old man, Bishop Urban, met him. This was not Pope St. Urban I. The bishop was carrying a writing: “One Lord, one faith, one baptism, one God and Father of all, above all, and in us all.”

“Do you believe this?” Bishop Urban asked.

Valerian showed his willingness to believe. He was instructed by the Bishop and baptized.

Valerian returned in the white robe of his baptism. He entered Cecilia’s apartment to tell her of the joy he felt because of his newly found faith. When he drew back the curtain of Cecilia’s room, he was awed by the bright light that glowed about her as she knelt in prayer. By her side stood an angel, whose face shone with marvelous beauty. Overcome with emotion, Valerian knelt beside Cecilia. The angle then placed a crown of roses and lilies upon the head of each of them.

The angel then offered to grant Valerian any request that he might make. All that Valerian asked for was that the grace of baptism should also be given to his brother Tiburtius, who was impressed by the change he observed in his brother Valerian. Then Tiburtius appeared. He, too, was offered an immortal crown if he would renounce his false God. At first he found it hard to believe.

“Who,” he asked, “has returned from beyond the grave to tell us of this other life?”

Cecilia talked with him for a long time. He was finally convinced by what she told him of Jesus. He, too, was baptized by Bishop Urban.

From the time of Nero (64 A.D.) until 313 A.D. the infant Church had her baptism of blood. About half of this time bitter persecutions were waged against her. Sometimes the Christians enjoyed peace, inasmuch as the laws against them were not enforced by tolerant emperors. Many Christians died in prison, often under torture; thousands were sentenced to a lingering death in mines, quarries, and galleys. Christians of high social standing were frequently put to death in their own homes to avoid a public demonstration. The Christians who attracted most attention were those who suffered martyrdom in the arenas, especially in the city of Rome itself.

The Prefect of Rome at this time was Turcius Almachius, a man notorious for his hatred of the Christians. It was now spring. According to its custom the Roman army was about to begin a summer campaign. Emperor Alexander left Rome with great pomp. The absence of the Emperor gave Turcius Almachius an opportunity to put into effect the edicts against the Christians. His violence was first directed against the faithful of the poorer class.

Valerian and Tiburtius devoted their wealth to alms-deed and their time to the task of giving a fitting burial to the martyrs of Christ to whom the imperial police refused burial. As a result, they themselves were arrested by Turcius Almachius and brought before him. They were called upon to renounce their religion. But they refused an act of worship to Jupiter. Valerian was scourged with rods. Finally both brothers were taken out to the Appian Way and beheaded.

Maximus was the notary whose duty it was to witness and record the fact of the death of Valerian and Tiburtius. Impressed by their self-sacrifice, he was converted and baptized. He was at once beaten to death with whips loaded with lead. Cecilia arranged to have to three martyrs buried in the cemetery of St. Praetextatus. Then she, too, was in danger.

The Martyrdom of Saint Cecilia

Anxious to get possesion of the brothers’ wealth, Almachius ordered the confiscation of all their property. Hence he had to deal with Cecilia. Cecilia was arrested for having buried the bodies of Valerian and Tiburtius. She was given no alternative but to sacrifice to the gods or to die. She chose death, for she refused to renounce her faith. Instead she converted those who came to induce her to sacrifice. When Bishop Urban visited her at home he baptized 400 persons there. One of those baptized was Gordian, a man of high rank, who established a church in her house, which Urban later dedicated in her name.

Cecilia was eventually brought into court. Almachius argued with her at some length. He was provoked by her attitude, for she tripped him up in his words.

Do you know,” was her answer to the threats of the prefect, “that I am the bride of my Lord Jesus Christ?”

Almachius recalled to her that he had the power of life or death over her. She answered, “It is untrue; for if you can give death, you cannot give life.”

Fearing that her youth, her nobility, and above all her charity to the poor would arouse the people if she were executed publicly, he had her shut up in the vapor bath of her own home that she might die of suffocation. Around the walls of this room ran leaden pipes which were heated to such a degree that death seemed inevitable. The furnace was fed with seven times its normal amount of fuel.

Cecilia remained a whole day and night in this stifling steam without suffering any harm. Finding himself forced to shed the blood of this Roman lady, Almachius sent an executioner to behead her. At the sight of the saint, the executioner lost courage.

With trembling hand he struck the three blows which the law allowed but failed to cut off the head of Cecilia. She fell to the floor. For two days and nights she lay on the pavement of her bath, alive and fully conscious, with her head half-severed.

The Christians rushed in after the hasty departure of the executioner and with linen cloths wiped up the blood flowing from her wounds, but did not raise her from the floor. Of the third morning the venerable Bishop Urban came to take leave of Cecilia. As she lay dying, she requested that her palace be made into a church and that the poor she had always loved should be cared for. She was lying on her right side, her hand as if crossed in prayer before her. She turned her face to the floor that no one might disturb her last secret communing with God, and thus expired. The position of her fingers – three extended on her right hand and one on the left – were her final silent profession of faith in the Holy Trinity. Her death probably occurred in 177.